Investing in a Thunderbolt PCIe card is the easiest way to add Thunderbolt 4 or Thunderbolt 3 support to a PC that didn’t previously support Thunderbolt. You’ll need a motherboard with a Thunderbolt header and a supported chipset to take full advantage of the fastest and most powerful connectivity available on a computer today.

These are the best Thunderbolt PCIe cards you can buy for your motherboard. 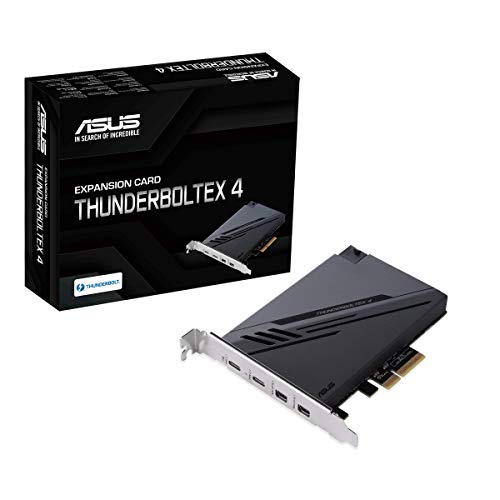 As for monitor support, you can connect a single 8K display at 60Hz or dual 4K displays. But make sure to connect the included Mini DisplayPort cables to the Mini DisplayPort IN port on the card and the DisplayPort output ports on your graphics to enable video support through the Thunderbolt 4 ports. The card allows daisy-chaining of up to five devices per port, great for those with many Thunderbolt devices, or multi Thunderbolt monitors setups.

The ASUS ThunderboltEX 4 is the best Thunderbolt 4 PCIe card for ASUS motherboards. It is easy to use and delivers the full 100W supported by Thunderbolt 4. 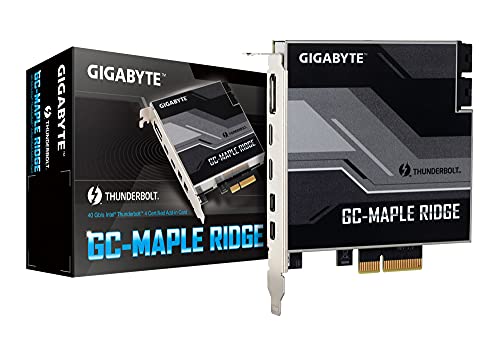 The GC-MAPLE RIDGE is a Thunderbolt 4 add-in card from GIGABYTE, and like ASUS, it uses a different type of Thunderbolt header. This card requires a 5-pin and 3-pin Thunderbolt header (two connectors), which is available on GIGABYTE motherboards from the Intel Z490 through Z690 series. GIGABYTE officially recommends an Intel 500 series motherboard or later.

The most standing-out feature of the GC-MAPLE RIDGE is the additional DisplayPort output that lets you connect a native DisplayPort monitor without needing dongles—most Thunderbolt 4 add-in cards include only the two Thunderbolt 4 ports.

The Thunderbolt 4 ports on this card allow dual external displays up to 4K at 60Hz, daisy-chaining up to five devices per port, and Power Delivery up to 97W. It’s an overall well-built PCIe card, and it works flawlessly with compatible GIGABYTE motherboards. Right now, the only motherboards that come with onboard Thunderbolt 4 ports are the ASUS ProArt B550-Creator and ProArt X570-Creator WIFI, so the THUNDERBOLT 4 AIC from ASRock should give you more options for AMD powered builds.

Like most cards, the two Thunderbolt 4 ports on this card deliver 40Gbps of peripheral bandwidth, which allows for high data transfer rates and support for dual 4K external displays at 60Hz or a single 5K display at 60Hz. Unfortunately, this card only provides up to 27W of charging power. It’s still plenty enough for fast-charging phones and tablets, though.

The ASRock THUNDERBOLT 4 AIC brings Thunderbolt 4 support to motherboards using a 5-pin header, including the latest boards from ASRock. 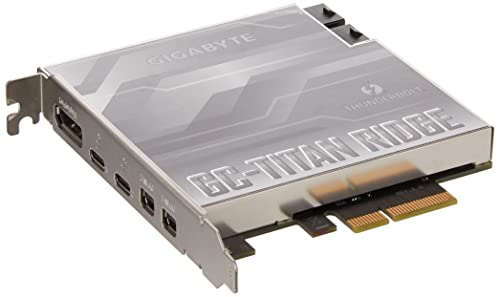 If you’re on the GIGABYTE Z490 platform, you’ll need to use both the 5-pin and 3-pin Thunderbolt header cables as these boards have two Thunderbolt connectors. For the rest of the motherboards with a standard 5-pin header, you don’t have to use the included 3-pin header cable. For ASUS boards, you’ll be limited to the Z390 and X299 series.

The GC-TITAN RIDGE 2.0 delivers the total 100W charging power supported by Thunderbolt 3 and faster 40Gbps speeds. It has two Thunderbolt 4 ports and an additional DisplayPort output that lets you connect a native DisplayPort monitor. Talking of monitors, you can connect a single 5K monitor or dual 4K monitors via the DisplayPort and Thunderbolt ports. 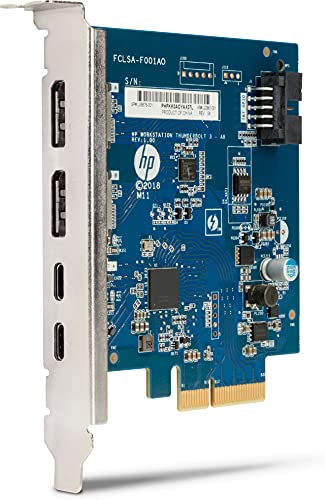 The card provides an easy way to add high-bandwidth connectivity to your workstation, allowing for faster file sharing, editing, and quick backups. You can connect multiple 4K displays, Thunderbolt 3 external SSDs and NAS devices, RAID storage, or a Thunderbolt 3 docking station to add even more ports to plug in all of your devices. 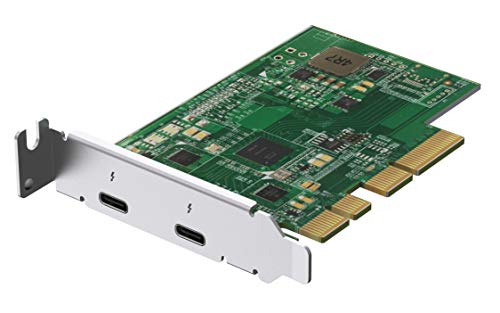 The QNAP Dual-port Thunderbolt 3 Expansion Card transforms your QNAP NAS, such as the TVS-h1688X and TVS-h1288X, into a Thunderbolt 3 NAS, allowing you to transfer files at a lightning-fast 40Gbps speed. This comes in handy in high-bandwidth workflows such as video editing, collaborative projects, and more.

Since the card has two Thunderbolt 3 ports, you can daisy-chain up to six QNAP Thunderbolt NAS devices for an even higher storage capacity. However, this card only supports data transfers. The Thunderbolt ports don’t deliver any charging power or support external displays.

Except for MSI’s Intel 500 series and later models, you can find a compatible Thunderbolt PCIe card for all of these motherboards.

All Thunderbolt PCIe cards require a PCIe 3.0 x4 slot on your motherboard. Ensure you have an available slot on your PC before buying a PCIe add-in card.

Other specs like 40Gbps transfer speeds and support for dual 4K at 60Hz displays remain standard on every Thunderbolt PCIe card. Don’t fall victim to the brand’s marketing gimmicks.

However, if you want future-proof support for 8K displays, go for a Thunderbolt 4 PCIe card.

How to install a Thunderbolt PCIe card?

A Thunderbolt PCIe card comes with four cables: a Thunderbolt header cable, a USB 2.0 internal cable, and two Mini DisplayPort cables. You need to connect all these cables to your motherboard to take advantage of data, video, and power. Some cards require updating the BIOS after installation.

Why do Thunderbolt PCIe cards come with Mini DisplayPort Cables?

Can I add Thunderbolt 3 to my motherboard?

Does Thunderbolt use PCIe lanes?

How to Install Docker on RHEL 8 (AlmaLinux/RockyLinux) Read More
HHardware
Let’s face it; you can’t carry your workstation monitor on flights whenever you need a dual-monitor setup at… Read More
HHardware
The ever-increasing popularity of Ultrabooks is making laptops thinner and lighter. This is great for two reasons; compact… Read More
HHardware
DDR5 has been around for a while now. Yet it is difficult to find a memory chip that… Read More
HHardware
When coding, having several monitors might not be ideal due to borders and divisions that only tire your…
wpDiscuz